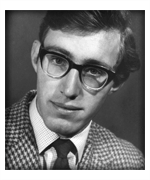 Educated at Hurstpierpoint College and after University becoming a Civil Engineer with Southwick UDC. Nick left for South Africa in 1958 and had a successful engineering career.

He married Natalie and together they raised three boys. Sadly his last few years were marred by heart problems, complications from which led to his death.