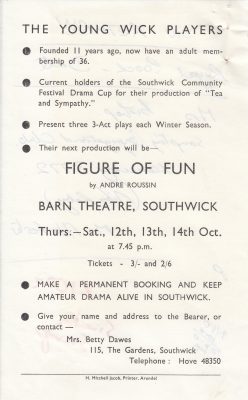 “They did a wonderful job”
– Brighton & Hove Gazette –

RH: wrote, “Figure of Fun had a good run at the Aldwych Theatre a few years ago, with John Mills playing the lead, and a supporting cast including such distinguished names as Brenda Bruce, Peter Bull, Joyce Heron, Natasha Perry and Arthur Macrae. The play itself is rather unusual, and I hope you will find the ideas that it contains thoroughly entertaining. More than that I don’t want to say for fear of spoiling the plot for you.

In the cast you will meet several of your old favourites, and one new comer, Valerie Collard, who had a great success in our Youth Festival winning play, A Resounding Tinkle, when I also had the pleasure of producing her.

Finally, you who have followed our productions of the last few seasons will be sorry to hear that it will probably be Adrian Hedge’s last appearance for us, as he will shortly be leaving our district. Over the past six years he has played many and varied parts with great distinction and to the best of his considerable ability. We wish him good fortune, and hope for his return to the friendly ties of the Young Wick Players in the near future.

ADAPTED plays occasionally retain their original clarity and snap, but Young Wick Players’ presentation last week of Figure of Fun by Andre Roussin was not one of this minority. For me it was a novelty that did not come off. The plot was practically non-existent and the play itself was inconsequential. But none of these faults can be blamed on the cast, who put up a brave show attempting to get the weird and woolly acts over.

Briefly this play [which can be described only as a mystery-comedy – the mystery being where the comedy comes in – deals with a watery character called Freddie who, on the stage, philosophically submits himself to the infidelities of his girl-friend while telling his friends what a wonderful world they live in.

Off the stage, he fights against being identified with the character he acts, only to find that in real life he is faced with the same situation. This time his wife is supposed to be the unfaithful one and he torments himself until, happily, it all turns out to be a test of his love.

But to get to this end, we have to go through several confusing scenes, and as the stage of the London theatre is the same as the hero’s flat the mind boggles with perplexion [sic].

Making his last appearance with the Players, Adrian Hedges put up a fine performance, although when I saw the play on Thursday he had to be prompted several times. This is understandable as the length of his speeches was phenomenal at times!

As Freddie, he managed to project the appropriate personality through the hazy plot.

He was well supported by Ross Workman as Edgar, the aspiring tragedian, who progressively becomes more assured of himself as time wore on until, in the final act, he was almost funny.

A short but very sweet performance was offered by Sheelagh O’Farrell, the dreamy poetess without an ounce of tact. Her delightful acting considerably lightened the obvious burden of her purposeless part.

Clodagh O’Farrell was a trifle wooden as Freddie’s stage girl-friend. If only the producer could have found her something to do when she was not speaking, she might have blended in with the set instead of standing out like a piece of contemporary furniture in a Regency room.

Nicholas Sweet played fairly convincingly as the stuttering individual-cum-garrulous Radio Paris reporter. But occasionally he forgot to stutter at the right time and this added to the general confusion.

The old trouper whose best part in the London stage-play is ruined by Freddie’s drunkenness, played by Betty Elliott, was the only actress whose lines were not superfluous. She remonstrated and shook with indignation to perfection.

I HAVE previously commented that Arthur Macrae’s translation of André Roussin’s comedy Figure of Fun is a difficult play to put over. Having regard to this fact, it must be said at once the the Young Wick Players and their producer Raymond Hopper, did a wonderful job with their production of it at the Barn Theatre, Southwick.

The plot is too complicated to explain in a short review, being almost a play within a play and including a dream sequence, but the story revolves around Freddie, his fellow actors and actresses and his wife.

Freddie was played extremely well by Adrian Hedges and especially was this true of the dream sequence in which he mimed to pre-recorded dialogue. Regine and Anne-Marie, fellow actresses, were Clodagh and Sheelagh O’Farrell. Edgar was Ross Workman and Anne Louise, constantly arriving to borrow precisely ten thousand francs, was made into a recognisable character by Betty Elliott.

Nicholas Sweet played Jacques Lambert, a roving radio reporter, who stuttered badly when off the air but achieved a high degree of fluency when broadcasting.

Police Constable Fox, arriving to collect a five-pound fine, was played by Ralph Dawes and the Stage Director by Barrie Bowen.

Freddie’s wife, Jeanne, who turns up at the end of the play, was given an entrancing and authentic accent by Jean Porter. Valerie Collard, a new-comer to the company, was Muriel, the housemaid.

Barrie Bowen, who was also stage manager, had contrived a delightful set which the Players had constructed. The excellent sound effects were by Graham Snow.

THE Young Wick Players’ entry in the Sussex Three-Act Drama festival is Figure of Fun, by André Roussin, adapted by Arthur Macrae, and since Thursday they have been pleasing audiences at the Barn Theatre, Southwick, with a more than capable production of this unusual comedy. The third performance to-night will be adjudicated by Mr Richard Ainley.

The company are ‘old hands’, with the exception of Valerie Collard, who makes diverting work of the maid’s rôle in the somewhat haywire London flat of an actor whose wife leaves him in the lurch.

Most of the dialogue takes place in the flat, but two acts are supposed to be actual scenes, set in Paris, being performed on the stage of a London theatre.

The cast, most them appearing as fellow actors of Alan Tracey, are seen both as characters in the ‘London’ play and as ‘themselves’ at the close of a performance. There are some well defined studies, and although the play is largely in lighter vein it has its moments of drama.

Producer Raymond Hopper has been wisely selective in his casting, notably in assigning the rôle of Alan – or Freddie in the play within the play – to Adrian Hedges. He gives a well sustained study of the actor whose wife lets him down, and has an easy stage presence and a voice which he uses to advantage. One the first night, however, he was several times ‘saved’ by the quietly tactful Mary Chinchen when he forgot his lines. Shortly leaving the district, he has been a valued member of the company for the past six years.

There are strong supporting studies by Clodagh and Sheelagh O’Farrell as Regine and Anne-Marie, by Ralph Dawes as a very suave and superior police constable, and by Jean Porter as Alan’s wife, Nicholas Sweet amuses as a radio interviewer, and there are droll contributions, too, by Ross Workman, Betty Elliott and Barrie Bowen.

The set is Mr Bowen’s commendable creation, and he is also stage manager and director.
[web ed: Barrie was in fact the ‘stage director’ of the play within this play!!]