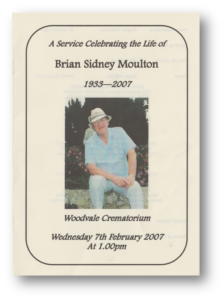 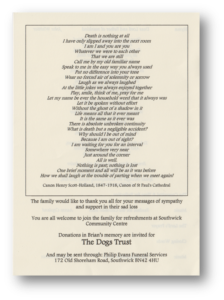 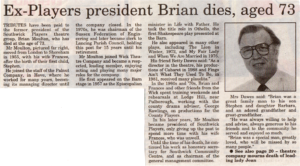 TRIBUTES have been paid to the former president of the Southwick Players theatre group, Brian Moulton, who has died at the age of 73.

Mr. Moulton moved from London to Shoreham in 1955, with his wife Frances, after the birth of their first child, Stephen. He joined the staff of the Palnut Company, in Hove, where he worked for many years, becoming its managing director until the company closed. In the 1970s, he was chairman of the Sussex Federation of Engineering and later became clerk to Lancing Parish Council, holding this post for 15 years until his retirement.

Mr. Moulton joined Wick Theatre Company and became a respected, leading member, enjoying acting and playing many major rôles for the company. He first appeared on the Barn stage in 1958 as the Episcopalian minister in Life with Father. He took the title rôle in Othello, the first Shakespeare play presented at the Barn.

He also appeared in many other plays, including The Lion in Winter, 1972, and My Fair Lady and When We Are Married in 1976.

His friend Betty Dawes said: “As a director in the theatre, his productions of Cabaret in 1988 and Fings Ain’t What They Used To Be, in 1981, received many plaudits.”

In the 1960s and ’70s, Brian and Frances and other friends from the Wick spent training weekends and rehearsals at Lodge Hill, near Pulborough, working with the county drama adviser, George Rawlings, on productions for the County Players. In his later years, Mr. Moulton became president of Southwick Players, only giving up the post to spend more time with his wife Frances, who was unwell.

Until the time of his death, he continued his work as honorary secretary for Southwick Community Centre, and as chairman of the general management committee.

Mrs. Dawes said: “Brian was a great family man to his son Stephen and daughter Barbara, and an adored grandfather and great-grandfather. He was always willing to help and advise, always generous to his friends and to the community he served and enjoyed so much. Brian was a special man, greatly loved, who will be missed by so many people. ”

“I owe Jean Porter and Brian Moulton a great deal. If it had not been for their nurturing and experience I would probably never have become so involved in theatre. I joined Wick Theatre Company at the tender age of fourteen. Jean was directing My Fair Lady. I clearly remember walking into the Methodist Hall and seeing Jean rehearsing the cast. My first impression was that she was too old to play Eliza. It was not until a break in the rehearsal that I discovered she was standing in for the leading lady. Jean immediately took me under her wing and encouraged me to become involved as part of the backstage crew for the show.

Some months later Brian set up a new Young Wick section of the company and through his workshops [aided by Frances and Jean] I learned most of what I know about theatre: backstage skills, set design and construction, direction as well as performance. Both Jean and Brian instilled not only the skills and discipline required of a performer – but also the need to respect and support fellow actors on stage. As my abilities grew, they were always on hand to guide and advise me – becoming close friends. When I first ventured into directing I was lucky enough to have these two people in the leading rôles. They were staunch supporters of ideas I wanted to try.

I would always wait until I had heard what they had to say on my performances in plays before I decided whether I had done a good job. They would always give me and honest crit.- and I loved them for it. If I heard Jean say: “I wouldn’t tell everyone this but I know you will listen…”, I knew the performance had lacked something and the next fifteen minutes would be spent discussing the details. It was always spot on, too. Brian was the same. I had more differences of opinion with Brian but, oddly, I was usually more involved in his productions.

Their legacy lives on – in the skills that they selflessly passed on to many other people. I thank them for taking the time.

One thing Jean always complimented me on was “the way you present your lady” in curtain calls. Brian would be equally complimentary about dance routines I was involved with. Well, Jean, the next time I have the opportunity to “present my lady” it will be in your memory. The next dance routine is for Brian.”

” I am just writing to say how sorry we are to hear of the deaths of Brian and Jean. We heard about Brian’s death too late to attend his funeral, and sadly we are unable to go to Jean’s funeral today. But our thoughts are very much with both families at this time.

Paul and I have happy memories of our days with the Wick Theatre Company, back in the 70s’ and were involved in several plays with both Brian and Jean [Paul backstage, and me on stage]. Please do convey our sympathies to both families at this time.