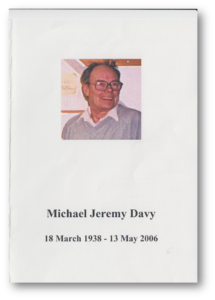 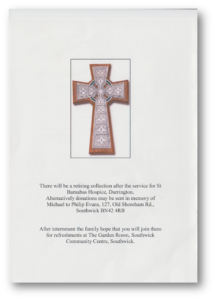 The Newsletter of July 2006 carried the following

“I can’t believe Michael has gone. Since he joined Wick in 1957 he has always been there quietly in the background but always willing to help in any way whatever, using his extensive tool kit and his skills and sharing his wisecracks!!

He has made such a big contribution to the Wick and the Opera over the years and has left a big gap that will never be filled. We shared a very special church service at St. Theresa’s with Margaret and I asked Michael Cullen who was such a good friend to Margaret and Michael if I could share his Eulogy with you all. He was happy to agree.”

Michael Cullen had these words to say;

“Way back in the late 1940s when I started school the teachers there: Sister Monica and Mother Mary Cuthbert taught things such as the Catechism, rods, poles and perch, feet and inches and all about chains. We were also taught that that there were 365 days in a year. Now I, like a good chap believed them for years. When I was 27 and first met Michael I realised that this was not the case. There may have been 365 days in that year but ever since that day every year has shrunk by a further five days. So 365 became 360 and the following year became 355 and so on. This must be the case because those years have flown past with ever increasing speed.

I met Michael in 1969 through work at Southdown Motor Services Limited. We became pals then and I am proud to say have remained so ever since. 38 years is along time. Long enough to finish of each others sentences .. and jokes.

Michael was a local lad who decided to go on the land and become a farmer. This he did and for some time worked on a farm in Somerset. After a 3 year stint in the 7th Royal Tank regiment as a radio operator he returned to the land to continue ploughing the fields. Sitting on a tractor in the middle of a filed is a very lonely existence for somebody who has just finished a 3 year stint in a barrack room full of blokes of his own age. Plus of course the money was very poor. Having leant to drive in the army he decided to have a go at driving buses. This he did and joined Southdown Motors in 1960. It seems such a long ago that we would go to such places as Turkey Island, Frogs Hole, Petworth, Pulborough, Byworth Village & Hawkshurst.

Some years prior to this his sister, Frances, had joined the Wick Theatre Group and subsequently persuaded Michael to help as he was a handy chap to help out with all the carpentry. So Michael duly joined the Wick Theatre group in about 1957. There have been about 189 productions since he joined and I would think that Michael would have worked on most of them. He also joined Southwick Opera in 1984 and helped out with many of their productions.

He enjoyed the social life with the group and there he met Margaret and they were married in April 1970. Both he and Margaret have continued their association with Wick ever since. My first introduction to the Wick was when Michael invited me to come and see Sailor Beware performed in 1979. I well remember ‘Aunt Edie’ putting a hot teapot on the sideboard. In rushed the fearsome ‘Emma Hornet’ played of course by Betty Dawes. It was then I realised what a polished group this was. I have been to many productions since that time and that one always sticks in my mind.

Michael and Margaret were not blessed with children of their own, but his sister, Frances & John had three children, Gillian, Nicholas and Clare. They had many weekends with them camping and days out. The girls well remember Uncle Michael as he was good at fixing their broken toys. We both enjoyed our camping holidays so much that Michael built his own trailer tent. I, on the other hand, not being a D.I.Y. expert bought mine. Not for me the hours of assembling, painting & lacquering. We have had many happy weekends together camping and boating. Michael really enjoyed his yearly boating holidays and spent all year looking forward to the next one.

Whenever you asked Michael to help out on something whether it be to pop round and feed the cat or fix a leaking tap, you could be assured that it would be dome. The words ‘completely dependable’ come to mind.

My wife Janet and I are very much involved in fundraising for Macmillan Cancer Support and whenever we asked him for help even at 7 in the morning he would always, always turn up. Usually before time.

It will not have gone unnoticed by many that Michael’s sister Frances, who was 18 months older that Michael tragically died about 18 months ago. Also in St. Barnabas Hospice.”