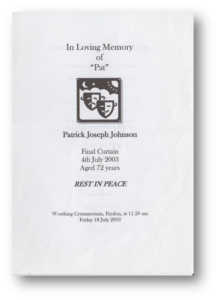 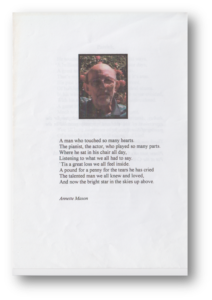 The Service of Thanksgiving included a poem,
written by his niece Annette Mason.

A man who touched so many hearts
The pianist, the actor, who played so many parts.
Where he sat in is chair all day
Listening to what we all had to say
‘Tis a great loss we all feel inside.
A pound for a penny for the tears he has cried
The talented man we all knew and loved,
And now the bright star in the skies up above.

“All those who knew and treasured Pat Johnson will be interested to know that a memorial evening is being planned. Anyone who worked with Pat on plays and other projects, and who would like to contribute a reading or a performance to the evening, should get in touch with Charles Porter (01788 510503) who will be coordinating the Wick contribution. Further details will be set out in the next Wick Newsletter, early in the New Year.”

The memorial evening was held on February 21st 2004.

Back in 1968 Patrick took the part of Teddy in Hugh Leonard’s The Poker Session directed by George Porter. The local press were running a series of ‘In the Limelight’ articles and No. 47 featured Patrick. Here’s what the writer had to say.

“Patrick Johnson is a self-confessed non-joiner, but he is closely associated with the Wick Theatre Company and has appeared in a number of their productions, and previously acted with the Southwick Players. He is a higher executive in the Civil Service, has A.N.E.A. [Hons.] and takes the art of drama seriously. He claims no particular preference between acting and producing, but has no particular interest in the mechanics of the stage. He has an urge to play Elyot in Private Lives [so far he has only produced other people in the part] and Thomas in The Lady’s Not for Burning. The lawyer in John Mortimer’s The Dock Brief also has a considerable appeal.

He is an accomplished musician, a member of the London Symphony Orchestra chorus, and has compose church music and music for plays. It is, perhaps, this joint interest which leads him to say that whereas a musician would be sure that his instrument is always in tune, amateur actors tend not to regard the necessity of keeping their bodies under the muscular control necessary to meet the demands of any part that they may be playing.”

I joined the Young Wick Players, as we were then called, in early 1957, halfway through rehearsals for an unexceptional thriller called Murder Party. Pat was appearing in this, although I now cannot remember much about it. The thriller may have been unexceptional, but I was thrilled by my new-found hobby and friends, and became totally hooked. I remember being impressed by Pat’s total ease on the stage, and we became fast friends following the after the show party, where I remember him falling about with laughter at my schoolboy humour. Anyone who found my jokes funny had to be a man of immense taste!

As I found out later, Pat was always surrounded by laughter.

A week or so later found us both in rehearsal for The Happiest Days of Your Life, which I still think of as one of the funniest plays I have ever been involved in. I was making my Wick debut in the tiny part of the schoolboy Hopcroft Mi. Pat was just brilliant as the much-stressed headmaster, Mr Pond, displaying that gift of comic timing given to few, and perhaps not used by us enough. How nice to see the play being given a revival at the National. (NB. Wick play-reading committee ?).

The next few years saw us busily involved, usually separately, in all sorts of projects, many cooked up by our forever-challenging president Molly Penney. However, I was privileged to be stage manager for Captain Carvallo, in which Pat both gave a wonderful performance as the eponymous hero and introduced me to the delights of classical music – especially by explaining to me the construction of the theme music we chose for Carvallo – ‘O, Silver Moon’ from Rosalka – still a great favourite of mine. And so I was introduced to another of Pat’s wonderful gifts – as an inspired teacher and encourager – particularly in one-to-one situations.

We also appeared together in one of our Southwick Festival entries – Wolf Mankowicz’s The Bespoke Overcoat – in which he gave a most touching performance as the old Jewish tailor.

Meanwhile I was meeting and falling in love with my future wife, Pam, then a nurse at the Royal Alex children’s hospital, but who unfortunately had decided, before we met, to go off to St George’s Hospital in London to do her general nursing training. Panic on my part! Pat to the rescue. He lived and worked Monday to Friday in Surbiton, where he had a flat. Since this was unused at weekends, he generously allowed me to use it then as the base for what we used to call in those days ‘courting’. (There seems to be no modern equivalent!). I also had the more dubious privilege of occasionally being escorted up and down to Surbiton on special occasions in Pat’s unique form of transport – a Messerschmidt bubble car. (I’ve never regained my boyhood enthusiasm for WW2 aeroplanes!).

Of course, come the wedding in September 1965, there was only one possible choice for our best man, where once again he exceeded the call of duty by insisting that I stayed with him from the stag party round to ‘getting to the church on time’.

At about the same time, he was giving one of the great performances of his career as Sir Thomas More in A Man for All Seasons.

There followed a series of summer holidays cruising on the Thames with Pat and Marion, where one remembers continuous laughter and gargantuan meals (where did he put it all?) and also some occasional musical evenings together, which I hope to remember further at ‘An Evening with Pat’ in February.

Our last joint venture for the Wick was in Hugh Leonard’s The Poker Session in 1968, in which I, as Billy, and Pat, as Teddy, were meeting for the first time after being released from mental hospital. I can do no better than to quote from the review of our old friend ‘Thespis’ – aka Walter Hix – writing in the B&H Gazette.

“Teddy is played by Patrick Johnson with such keenness and insight, and with a quaint twisted sympathy that is by turns alarming and amusing. Delving in my memory this is a performance the like of which I cannot recall; it is technically brilliant, strangely credible and perfectly timed.”

After the play Pat said to me, “Well, that’s it. There’s nothing else I want to do on the stage”. And although he did appear in several other productions, most notably as Fagin in Oliver in 1982, it was 1968 that seemed to me to be his theatrical performing zenith. My caption to my scrapbook photo of Pat in The Poker Session reads – ‘Johnson in his pomp’.

Sadly, the arrival of my family and his increasing concentration on his music meant that we saw less of each other over the years than I now would have wished, but he kept his involvement with Wick by his mentoring of our younger members, and frequent help with the musical productions, and I was delighted when my elder daughter Joanna was able to experience his teaching and encouragement.

Pat is sadly missed in our household, but shines brightly in our memories. Wick News March 2004. “I’m sure all those Wick members who were at this evening will agree that it was a splendid tribute to Patrick. Thanks to Charles and Jamie who put their energies into the organisation and to hosting the evening with such wit and style.”

And Charles Porter wrote: “A massive thank you for your contribution to an evening which appears to have been enjoyed by all and was seen as an appropriate celebration of the life of our mutual friend.

Aside from the success of the evening, there is every prospect that a healthy donation will be made to St. Barnabas Hospice….£1,500 after the contribution of the Barclays £4£ scheme.”