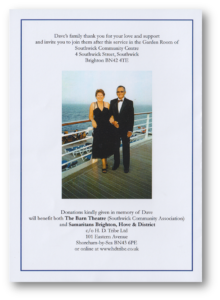 “All the World’s a Stage”

When we talk of “All the World’s a Stage”, we’re usually thinking of the idea that the stages of a person’s life are like the progression of scenes in a play.

And one of Shakespeare’s famous characters gives us a wonderful account of people moving through the many stages of life – from the tiny baby, through childhood, youthfulness, maturity, middle-age and older-age. It’s a great “stage caricature” of people at different ages. But it’s not the best way to appreciate the life of one particular real person.

When it comes to the real world, it’s the nature of the person them-self that’s the real thing – not the various ages and stages that they happen to move through. But how can we best appreciate the things that are special to the life of one person?

Well, one very good way is to think about the things that we actually choose to spend our time on, the things that go beyond the time spent working, and beyond all the necessary day-to-day things of everyday life. It’s about the priorities that guide us and the choices we make for ourselves.

As we’ve heard so movingly, family was of course the priority at the heart of Dave’s life – first and foremost. But he was also full of energy that he shared with friends. He was also very much involved with activities in our local community. And, as many of you know, he had a great interest in theatre – as someone who was keen to be involved in all the “hands-on” business of creating theatre entertainment.

These three things – friends, community and theatre – came together very strongly in Dave’s social life.
Dave first got involved in theatre when Lynsey and Hannah were at play-school, where Betty Dawes was often encouraging the parents to come to shows at the Barn Theatre in Southwick. And from watching shows, it wasn’t long before Dave unexpectedly found himself in them. His debut came in 1981, as a card-player in “Fings Aint What They Used to Be” at the Barn. And from that point he was hooked! From then on, as Carol said, “he was either in it, or on it, or building it” !

The “building” side of things actually started through a community body, the Working Association of Mothers, where groups of local parents would organise playgroups and activities for their young children. When the time for a pantomime came around, Dave found himself – along with another parent, David Comber – making scenery for “Nigel and his Giant Boot”. The biggest challenge, as you have probably guessed, was how to create … a giant boot !

Work on the giant boot began in the driveway of the family house in Victoria Road. Finally, that winter, the giant boot was finished and painted, and the two Daves carefully carried their creation indoors – out of the freezing cold and into the warm house. Alas, the paint de-frosted itself overnight, and by the morning had slid right off the boot and spread itself all over the dining-room floor !

On the stage, Dave appeared in many operas and musicals. He loved the Gilbert & Sullivan operas, most of all “The Pirates of Penzance”. And the American musicals, “Guys & Dolls” and “Oklahoma”, which he also appeared in, were great favourites too.

Dave took the business of learning words and lyrics very seriously. Apparently his method was to do this out loud, very vigorously – which he would do while out at work, or when building scenery, or going about household tasks. This maybe wasn’t appreciated by everyone who was in earshot, but he was determined to “get those words into his head”!

Dave was also very interested in watching other people’s performances, particularly from the vantage point of the “wings”, when he was in a show or doing stage management work. Some of you here who’ve been on the Barn stage may have noticed how closely he would watch the action from the side. In fact, Hannah tells me that when she was a teenager Dave would sometimes take her backstage just in order to see a close-up view of a performance he was particularly interested in.

And the theatre really was for a quite a while a “whole family” thing … when Lynsey and Hannah were performing in shows, while Carol was out front in the front-of-house team, and Dave was backstage doing stage management – on a set which he had played a big part in building. By the late 1980s, all four of them, together, were closely involved in the Christmas shows – in particular “Pinocchio”, “The Lion, the Witch and Wardrobe” and “Alice in Wonderland”.

In terms of all the huge time and energy which Dave put into the theatre, a very big part of it was the building of sets and scenery for productions at the Barn – something he did for many years for the Wick Theatre Company and the Southwick Opera. For Wick Theatre Company alone, he was involved in building sets for more than 120 shows – which is quite astonishing.

The workshop which these groups shared has always been full of “characters” – and Dave clearly enjoyed the banter and the “wind-ups” that were a part of the workshop tradition, as well as the serious business of building sets that were practical and looked good.

In fact, even in more recent times when Dave had to cope with health problems, he was determined not to miss the activity and the companionship of the regular workshop sessions. He’d get down there on his mobility buggy and he would always find a job that needed doing – in between the “regulation tea breaks” of course !

Over the years, many many people will have experienced the ingenuity and the practicality that Dave brought to this field of set-building. One of the highlights of that must have been the set of “Steel Magnolias”, a play set in an American ladies’ hairdressing salon. With guidance from Carol, of course, he managed to rig up a fully-functioning hair salon, complete with plumbed-in sinks, which was so good it could have opened for business between performances !

But there are countless examples of the practical approach which he obviously enjoyed bringing to each new challenge. Like, how to allow a Cheshire Cat to magically appear at the top of a high tree without the cat-actress falling out of it. Or how to discreetly find out the measurements of the derrière of a particular actress … so that a playground slide could be made without the risk of her sliding down it and getting stuck halfway. Or how to get several large items of scenery through a pair of stage doors which turned out to be 1-inch narrower than the scenery that was waiting to go through them. Dave’s answer to the problem … well, let’s just say, a few minutes later, no-one would ever know about the magic that makes door-frames temporarily disappear and re appear!

In all sorts of ways, Dave impressed people with his enthusiasm in meeting a challenge. He was always so positive about finding a solution. Of course, he sometimes teased the Treasurers of the theatre groups about bigger budgets for building more ambitious, more beautiful sets. But he would always find ways to deliver what was needed for a good show.

Above all, I think that Dave saw the workshop activity – and the whole experience of working to produce theatre shows – as a team activity. Those of you who have been involved in the “making” of theatre (of whatever kind, in whatever place) will know that it can only be done by all sorts of different people working and collaborating with other people, to produce lots of different contributions, that all go together to make up the whole thing.

I think Dave saw that very clearly. He loved the business of the theatre and the shows. But he became such an active part of theatre through knowing the value of family, the value of friends and their companionship, and the value of shared community effort. It was an important part of his life. And we all remember how much he himself brought to it.